From "The Aleph Archive" Series

ssheikh Mohammad said: speech world is a vast arena; everyone says what they want. I repelied. “speech world is narrow it is the meaning world that is vast. step beyond speech and you will find a vast arena. see if you are close to being far or far to being close”

“On the verge of showing the physical absence of words, on a page that has been devoid of words. The same words were made to convey meaning. Now that they have become words, they have lost their meaning. Later on, they would be condemned to be exposed the misunderstandings of the readers, as they are cloaked in and represented as a cultural product.
This absence (i.e., the empty space of the words), and what is left of the absence (i.e., paper filings), are equally exposed to the danger of the readers’ interpretation.
These are the very words that have been scraped out of their context, now appearing as paper filings to the audience, so that, in their absence, they may find an opportunity to turn into the words of the readers. Now the readers are doomed to be writers as they fill in the blanks with their own words. While these utterances turn into the words of the writer, their form of existence depend on the reader.
Now with the elimination of the writer (the narrator), the actors that play the role of readers (the audience) are sentenced to be readers and writers at the same time, so that they can talk to themselves about themselves indefinitely. They act as someone who fills the void inside themselves, or search for it the paper fillings that bear witness to their own physical reality: the fact that they are mere filings inside glass plates, whether they are doomed to silence or drowned in a self-imposed quietude. The filings are now in the place of a narrator, who is archived in-between two glass plates, and then they are added to “The Aleph Archive.” 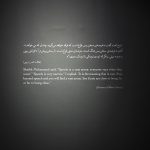 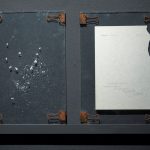 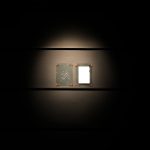 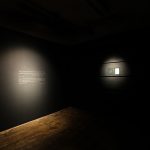 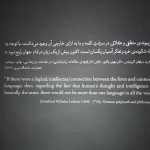